2019 marks Zymo Research’s 25th birthday. From its simple beginning manufacturing yeast research products out of a garage, to the industry leader it is today, Zymo Research never lost sight of its vision - to have a positive impact in the biomedical field and contribute to the greater good of humanity.

Our 25th anniversary is a celebration of that vision and all the people who have supported us and helped change the world. None of this would be possible without you. Your research, your feedback and your support has been the driving force behind all we have accomplished.

Let this year be not only a celebration of the past, but also a promise for the future. To continue our positive impact and stay true to our roots as we grow.

We hope you enjoy the stories and surprises this year as we look back at the past 25 years and look forward to a brighter future together. We can’t wait to see where we go from here.

The story starts in an unusual place - in an old garage, with second-hand equipment, a passion for science and a desire to make things better. Small and unassuming, a makeshift lab in Orange, California would soon become the birthplace of ideas and products that would change the world.

Out of a broken centrifuge that could only spin down yeast, one scientist spun a clear vision - to have a positive impact in the biomedical field and contribute to the greater good of humanity. That vision started to materialize in the creation of industry-leading yeast research technologies, followed by spin columns and plasmid purification products.

Without the need for investors, Zymo Research was able to build on passion and the voices of customers, instead of investment dollars. This allowed the company to listen to what researchers needed and act immediately to provide highly advanced technology that made their work simple.

With this approach, Zymo Research expanded globally and established 6 facilities around the world in places like Freiberg, Germany and Beijing, China. Today Zymo Research creates some of the most technologically advanced products available to researchers in academia and the biomedical field, driven by the fundamental belief that the beauty of science is to make things simple. 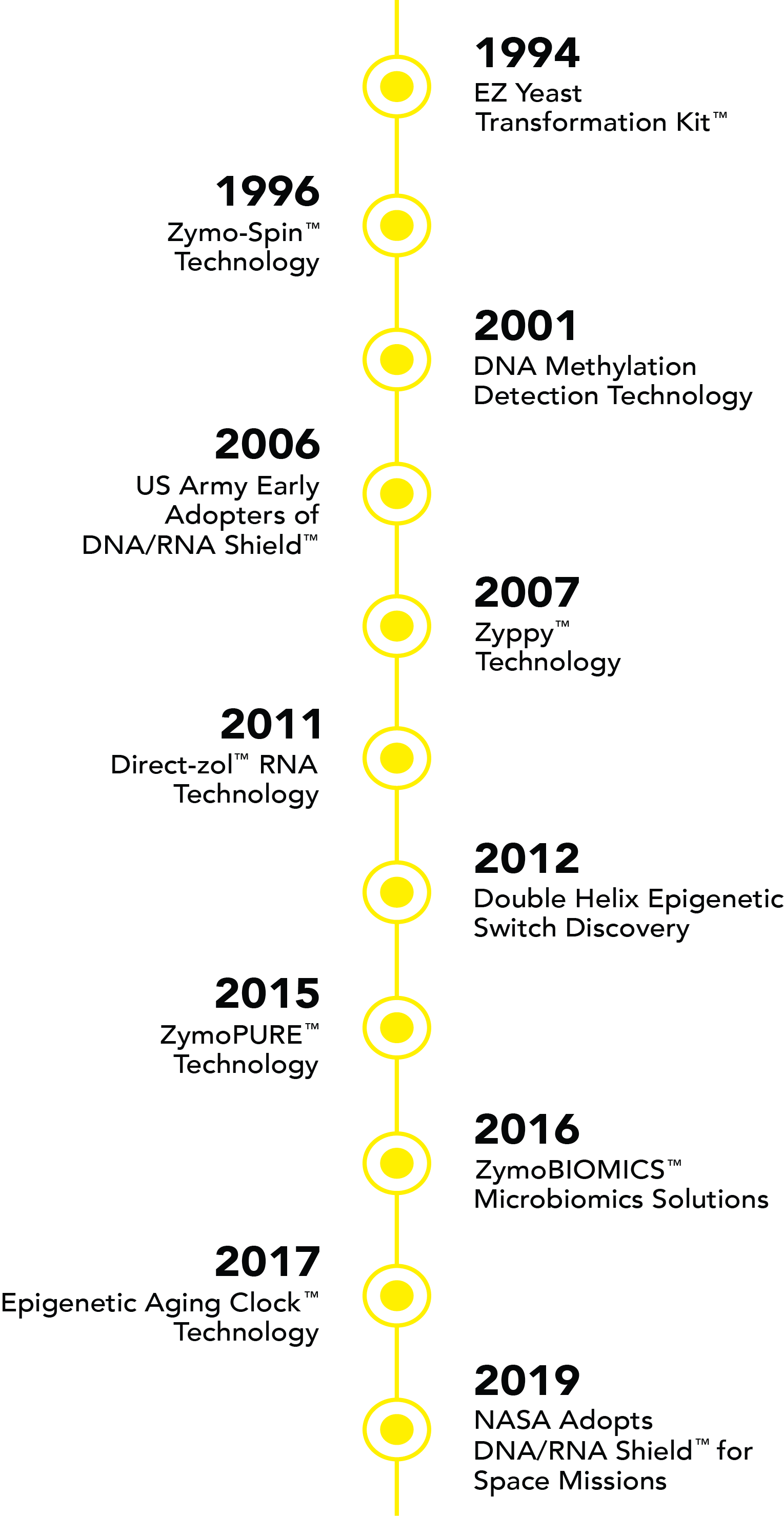 In an ordinary garage in Orange, California, a young scientist looked down in disappointment at murky tubes of E. coli from a broken-down centrifuge.

The small pellet that emerged from the centrifuge marked the beginning of Zymo Research Corporation and the start of a revolution in yeast research technologies.

With just one part-time employee and no marketing budget, Zymo Research’s name started to appear in industry-leading publications for its coveted yeast products. Zymo Research soon became a leader in the field of yeast research, but the company’s founder knew its true potential was well beyond yeast.

As the company grew, it expanded its focus to include plasmid purification, RNA/DNA isolation technology and also became an industry leader in epigenetics and microbiomics.

While the company has evolved, the three budding yeast cells that still adorn Zymo Research’s logo are a constant reminder of its roots. They represent a timeless promise that its growth will always stem from one fundamental belief - The beauty of science is to make things simple.

A Spin Down Memory Lane

The Story of the Micro-Elution Spin Column

While researching unidentified pathogens, a young virologist became frustrated with conventional methods of nucleic acid clean up. Low concentrations of DNA from large elution volumes hindered his research and took up precious time. One day, he finally had enough of inefficient protocols and products, so he pioneered his own.

With a glass microfiber filter, a micro Eppendorf tube and a hot needle to make holes, the founder of Zymo Research fashioned the first ever micro-elution spin column.

The homemade spin column provided the scientist with very high concentrations of DNA from small elution volumes. The ultra-pure, highly concentrated DNA from the spin column enabled him to reliably sequence DNA directly from PCR without cloning, something that had previously been very inconsistent.

When nearby researchers noticed how efficiently the scientist was working, the spin columns started to disappear from his work station. It was clear that this technology fulfilled a widespread need in the industry, so he decided to make it available to the world. This marked the beginning of the Zymo-Spin Micro-Elution Spin Column.

Zymo Research’s micro-elution spin column technology designated the first wave of DNA purification products launched by Zymo Research and went on to be used in groundbreaking research, including the discovery of the West Nile Virus in North America. Today, the Zymo-Spin technology not only simplifies work at the lab bench, but it enables researchers to make cutting-edge discoveries in various fields all over the world.

How DNA/RNA Shield Got Its Start

Prompted by scorching temperatures in the Middle East and no access to freezers, the Walter Reed Army Institute of Research set out to compare nucleic acid preservation methods to find the most reliable solution for collecting specimens for surveillance.

Inspired by the idea of a soldier in the Middle East with nothing more than a small tube and a backpack, Zymo Research submitted formulations that could preserve nucleic acids at any temperature and also protect users from harmful pathogens.

What would later become DNA/RNA Shield, the formulations provided by Zymo Research far outperformed other methods due to its ability to inactivate pathogens and stabilize RNA in extreme temperatures. The results of this study sparked other military interest from US Army Medical Detachments in Kuwait.

After validating the preservation of viral nucleic acids in DNA/RNA Shield, a group requested and distributed the solution throughout the region. The reagent helped the operation of field response to disease outbreaks and facilitated sample collection from places where medical assets were very limited.

As Above, So Below

Venturing into research on the human microbiome in microgravity, NASA approached Zymo Research in need of a method for astronauts to preserve and collect biological samples on the International Space Station at low gravity.

A custom solution was made for NASA’s research, with DNA/RNA Shield to preserve microbial metatranscriptomic profiles in space until missions are complete and samples can be brought back to Earth for analysis.

DNA/RNA Shield enables studies on the impact of long-term space travel on astronauts’ microbiome and how it relates to their health and immune function. This research aims to lower the health risks associated with space exploration, which will help shape the future of space travel.

In April of 2019, Zymo Research was graciously presented a plaque by NASA's Johnson Space Center, recognizing the company for their development of a unique sample collection tube to support human research on board the International Space Station.