How COVID-19 Testing Has Evolved Throughout the Pandemic

From Drive-Through Testing to At-Home Tests, a Lot Has Changed

Few would have predicted that the greatest threat to humanity in the 21st century would be something that we can’t even see. With powerful tools such as cloud supercomputing available, and long sought-after medical tools such as gene therapy becoming more viable by the day, how could something so small bypass modern technological surveillance to stymie global civilization? At the capital city of Hubei Province in the People’s Republic of China, that’s exactly what happened.

In December of 2019, Wuhan public health officials responded to the first few cases of a respiratory disease that would soon be known to the world as COVID-19. In a matter of months, the SARS-CoV-2 virus had spread so rapidly that it disrupted the entire healthcare industry, triggering global shortages of medical supplies and healthcare access. What followed was a tide of measures that dominated the news cycle: plans to establish widespread CLIA-licensed laboratory testing, mandatory lockdowns, and social distancing mandates served as constant reminders of how much this microscopic threat had shifted the world. Wars are waged and threats are ended with good information, and so widespread testing became the first tool in stopping the spread of this invisible assailant.  However, the infrastructure in place was not equipped to handle a testing volume quite as large as the entire public.

In the early weeks of 2020 and with recent acknowledgements from health and government officials surrounding a “public health emergency of international concern”1, the CDC rolled out a rapid diagnostic test in a record time of just one week. The general public could now utilize their primary care physicians or get an appointment through a medical facility to be tested for the virus. But as these test kits arrived in labs across the country, laboratory personnel started identifying problems. Inconclusive results began popping up, jeopardizing confidence in the test and further pushing back diagnostic and surveillance efforts to combat the rapidly spreading virus. Something had to change.

With so few authorized testing kits available alongside an incredibly large amount of testing demand, the FDA had to start issuing EUAs (Emergency Use Authorizations) to companies that wanted to produce and distribute their own COVID-19 testing kits. This was game-changing for several reasons. First, an EUA can be issued much faster than full FDA approval. With the virus spreading so quickly and stay-at-home orders in place, surveillance efforts were really stunted by the possibility that it could take months or even years to get full FDA approval for a COVID testing kit. EUAs essentially allowed companies to validate their products in a less restrictive way, demonstrating that their kits worked well enough in their respective areas. This shrunk the timeline for approval down, enabling companies across the United States to start distributing more coronavirus testing kits in efforts to combat virus spread and control.

After the FDA started issuing EUAs, testing volume needs were met within a month. sample collection device manufacturers were now producing kits in massive quantities, making it almost as easy to get a COVID-19 test as it was to put gas in your car. One of the largest testing sites in the nation existed at Dodger Stadium, providing thousands of open appointments per day. Dodger stadium ended up administering a total of over one million tests during its nine-month operation before it was transitioned into a mass vaccination site2. This huge supply of testing kits also introduced a new demand in pandemic control. Clinical laboratories in California require employees to be licensed by the California Department of Public Health, most notably with those obtaining a Clinical Laboratory License (CLS). With numerous EUA’s being granted to dozens of companies, the next wave of demands revolved around laboratory personnel. To put it simply, there were not enough licensed employees to meet the massive amounts of samples coming in to run a COVID facility. In comes Executive Order N-25-20.

Issued by the Governor of California, this order temporarily suspended laboratory personnel licensing requirements within the sole context of COVID-19 testing. While laboratory directors and supervisors were still required to be licensed, testing personnel positions could now be extended and offered to those with a B.S. degree, opening an entirely new field of experience for non-licensed scientists.

Testing was now completely accessible across one of the most populous states, and a new type of sample collecting method began gaining popularity: pop-up COVID testing facilities. These mostly drive-through establishments introduced self-administered exams via oral or nasopharyngeal swab that could be done from the comfort of your own car. Not only was this process incredibly user-friendly, safe, and accessible to everyone, but it allowed for a larger sample volume output, reducing unnecessary wait and collection times previously associated with earlier stages of the pandemic. Additionally, drive-through testing centers vastly decreased probability of SARS-CoV-2 exposures at testing sites by removing lines and creating social distance by design. These facilities could also accommodate thousands of people per day, often out growing on-site labs and requiring samples to be sent out to larger scale COVID-19 testing laboratories just to meet requirements. This introduced yet another tool in the invisible war against the coronavirus. 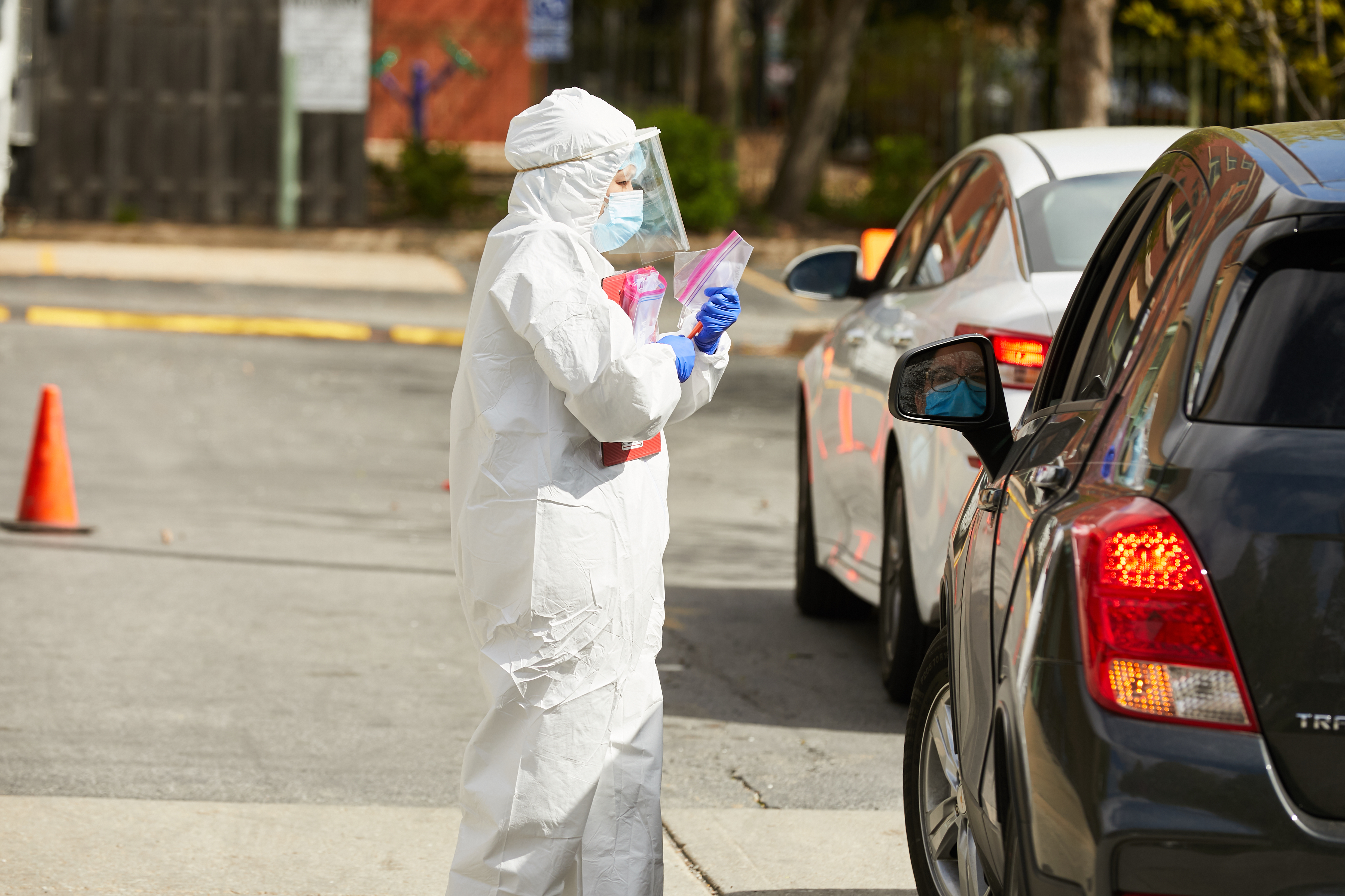 The next big obstacle to COVID-19 sample processing thus far was temperature. Not only did the soon to-be-deployed vaccine need to be transported and stored in -80 °C freezers, but the integrity of transported samples themselves relied heavily on refrigerated temperatures. Leaving samples in traditional universal transport media (UTM) at room or even warmer temperatures compromises the stability of nucleic acids, degrading sample quality and thus, confidence in diagnostic test results. A sample improperly stored during transportation, or one impacted by increasingly common transportation delays, would produce inaccurate results.

Dr. Jennifer A. Doudna, an elected member of the Institute of Medicine and recent Nobel Prize in Chemistry recipient from UC Berkeley, has been at the forefront of pop-up SARS-CoV-2 testing laboratories throughout California. Their decision to use DNA/RNA Shield instead of UTM stemmed primarily from wanting to protect their staff from accidental exposure in addition to ease of transport without refrigeration3. Zymo Research’s DNA/RNA Shield inactivates viruses and stabilizes nucleic acids for transport at room temperature, not only making it safe for every set of hands that handles the sample post collection, but completely removes the previous requirement for transportation to other facilities with refrigeration or dry ice. This eliminates any possibility of sample degradation due to improper storage.

A Solution for Stability

With the inactivation and sample preservation technology from Zymo Research’s DNA/RNA Shield, pandemic monitoring was being driven in part by increased test availability. Most testing sites were open to appointments during business hours with a select few remaining open just a few hours past that. This provided many people with accessible options. But not every working person could commit to a 30-minute appointment plus travel during the work week, and weekend appointments were spreading thin. To further increase testing bandwidth, at-home testing for COVID-19 needed to become a possibility.

One type of testing that could be done from your home without the use of a laboratory was rapid antigen testing. Becoming more widespread in the later months of 2020, rapid tests were being commercially produced by many companies like Walgreens and CVS. These quick and simple tests are popular primarily for convenience as turnaround times were much faster, however they do not harbor the same sensitivity as their fellow molecular sibling. Polymerase Chain Reaction (PCR) tests allowed for amplification of even the traces amounts of viral RNA, providing detection of positive samples well before symptoms persisted. A combination of high-sensitivity testing with at-home sample collection would be a great asset in monitoring the pandemic.

Using DNA/RNA Shield, samples could now be collected and sent miles away to testing facilities with no worry of sample degradation. Coronavirus surveillance was now accessible to patients from their own homes. This benefited not only travel-limited individuals, but families in remote or hard to access locations around the country. Samples could now be sent for durations upwards of 30 days while still maintaining the integrity of nucleic acids for high sensitivity testing. But at-home testing came with additional problems.

The Future of Safe Sample Collection

Sample collection was now completely unsupervised, increasing the probability of human error impacting sample quality. Most people have little to no sample collection experience, and the probability of accidents such as spilling stabilization solution or dipping swabs into the solution before swabbing their mouths increased. Ambient temperature aside, misuse in sample collection compromises the sample and jeopardizes patient health and test accuracy. The solution? Remove any type of interaction with the liquid stabilizer and sample until necessary.

SafeCollect Sample Collection Kits feature Zymo Research’s DNA/RNA Shield in a patented tube that prevents spillage, contact, and/or ingestion of the sample stabilization medium, combining user safety and consistent sampling together for a robust analysis with telehealth collection services. The patented SafeCollect Saliva and Swab Collection Kits have tubes that utilize a safety seal, only exposing your sample to the reagent once you’ve collected the sample and are ready to seal the tube. Samples collected at home are then shipped to a laboratory, where analysis can begin up to one month from collection date. In a time where everyone is still encouraged to minimize exposure by staying home as much as possible, the future of healthcare continues to progress and SafeCollect is but one solution to the ongoing efforts surrounding this pandemic.